What is the reaction R1 for the blow fixed end beam?

From various formula tables, R1=3wL/8. Is this correct?

This is correct only if the entire structure is built together at the same time. What would happen if support 1 is added later? Let's assume that the cantilever part is built first and then support 1 is attached to the deformed cantilever.

Let's think about deflection. What is the tip deflection for the cantilever beam below? 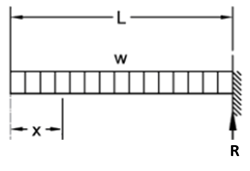 From various formula tables, Δ = wL4/(8EI). Is this correct?

This is correct only if we ignore the effects of creep: for concrete structures, strain increases even under constant stresses. In other words, deflection increases without load increases.

The calculation of creep coefficient φ(t, t0) is very straightforward from code, and CEP-FIP is the one of the most commonly used.

Assume a cantilever beam is built at age t0, support at the tip is added at age t1, and we want to calculate the reactions at age t2, sometime later than t1. (Example 6-1, Concrete Structures, 3rd. ed., by Dr. Ghali, et al.). 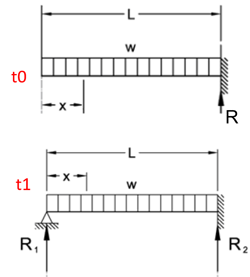 where E(t0) is the elastic modulus of concrete at t0. E(t) varies as time passes.

At age t1, the tip deflection is

If this deflection is free to occur up to age t2, i.e., if we never add the support, the tip deflection would be

is "restrained" due to the tip support, which we added at age t1, and internal forces are redistributed between age t1 and t2.

This is also called "moment redistribution due to creep", and understanding this concept is essential to design segmental bridges.