Understanding Load Rating of Bridge as per AASHTO LRFR

Bridge load rating is a procedure to evaluate the adequacy of various structural components to carry predetermined live loads. In simple words, it is determination of the live load carrying capacity of the bridge. Load ratings are expressed as a rating factor (RF) or as a tonnage (for legal and permit vehicles) for a particular vehicle.

It is helps us to know the ability of the bridge to carry live load for design and allowable legal vehicles, overloads, and to determine weight postings. Hence, the bridge rating factors can be used to aid in decisions about the need for:

Figure2: Application examples after evaluating Load rating of a bridge

How load rating philosophy is different from bridge design philosophy?


Load rating as per AASHTO LRFR:

The LRFR methodology consists of three distinct levels of evaluation:

The result of each evaluation serves specific purpose and also inform the need for further evaluations.

It is a first level assessment of bridges. It gives measure of the performance of existing bridge to current LRFD bridge design standards.

Purpose: Design load rating can serve as a screening process to identify bridges that should be load rated for legal loads

There are two levels of the Design Load Rating: The Inventory rating level generally corresponds to the rating at the design level of reliability for new bridges in the AASHTO LRFD Bridge Design Specifications but reflects the existing bridge and material conditions considering deterioration and loss of section.

Load rating based of the operation rating level generally describe the maximum permissible live load to which the structure may be subjected. Generally, corresponds to the rating at the Operating level may shorten the life of the bridge

Purpose: Bridges that do not have sufficient capacity under the design-load rating shall be load rated for legal loads to establish the need for load posting or strengthening.

This third level of rating should only be applied to bridges having sufficient capacity for legal loads. In other words, Permit load rating should be used only if the bridge has a rating factor greater than 1.0 when evaluated for AASHTO legal loads.

Purpose: Permit load rating checks the safety and serviceability of bridges in the review of permit application for the passage of vehicles above the legally established weight limitations.

The process of load rating can be understood from the below shown chart flow: 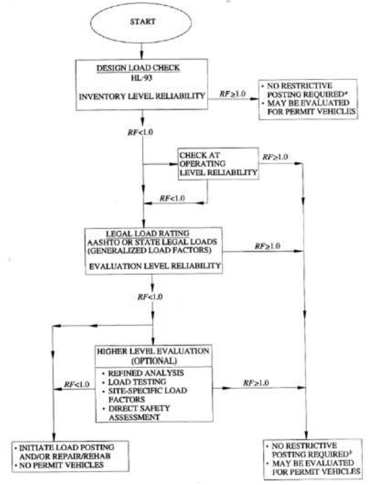 Calculation of Rating Factor (RF) as per AASHTO LRFR 2019:

The RF value shall be taken as below according to the LRFR standard: 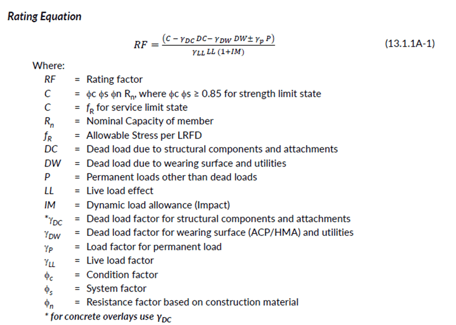 midas civil offers the code AASHTO LRFR 19 for the calculation of load rating. The feature is defined in such a way that the user input can be provided in the simplest way possible.

Load rating feature is facilitated for both, steel composite bridges as well as PSC bridges. 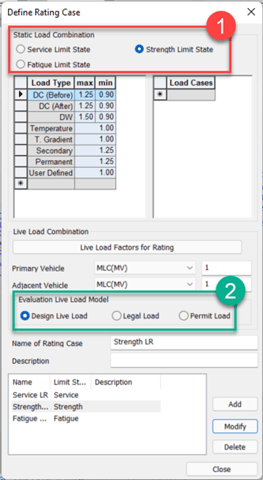 We get the load rating design results in the form of tables as shown below:

Apart from the tabular results, an excel report is also generated with the results so that it facilitates the design engineer in his work with the best possible way: 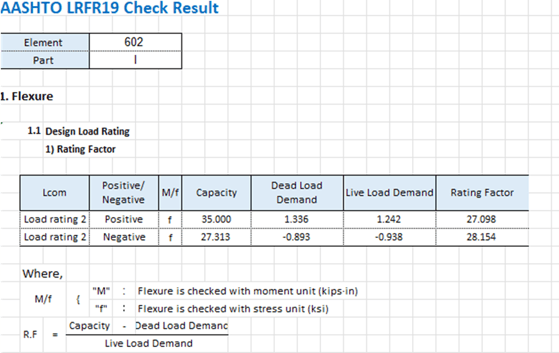