In the previous blog basic finite element mesh explained, we have looked into several types of conventional elements within the 1D, 2D, and 3D realms. We also explained briefly the pros and cons of each type of element and its applications in finite element analysis. In this blog, we are going to talk about two types of special-purpose elements available in MIDAS analysis software.

Links are created by connecting 2 nodes together, just like the way we create any other 1D elements. However, it is not a 1D element and behaves differently from truss and bar elements. Links do not have structural properties, such as unit weight, Poisson’s ratio, etc. However, elastic links can have stiffness in displacement and rotational stiffness in each axial direction. Elastic links can be used to simulate elastomeric bearings and establish simple contact. Rigid links can be used to connect mesh sets of different dimensions.

The DOFs that are constrained by the independent nodes can be selected out of the 6 DOFs of the dependent nodes, and this can be used to generate the directional selective rigid links. The following example shows the constrained behavior in the x-y plane:

Figure 1. Example of rigid behavior in a plane.

Structural engineers often use the 1D/grillage model to perform general analysis on civil structures. When they would like to investigate structural nuances to come up with a less conservative design, they need to use a detailed finite element method based on 2D plate/3D solid elements. However, due to the time cost and computational limit, they rarely model the entire structure using the detailed finite element method. Instead, they identify the localized structural zone based on the general analysis or engineering judgment and perform detailed analysis in those locations. The process is as follows:

In the example shown below, a bridge structure was modeled using midas Civil 1D elements. Based on the general analysis results, the structure connection shown in figure 2(a) is experiencing a high level of stress, however, the result does not tell us the specific stress distribution or any nonlinear behavior such as a potential fracture. Therefore, with a moderate level of modeling effort, a 2D plate element model is created in midas FEA NX, shown in figure 2(b), reflecting explicitly the localized box girder connection. Its inelastic strain plot is shown in figure- 2(b) and using this result engineers may be able to identify fracture initiation.

In the example above, force and moments are identified in figure 2 (a) at nodal points from the general analysis results (midas Civil) and applied as loads in the localized model. Rigid links are used to help distribute the load applied by constraining the motion between the independent and dependent nodes as shown in figure 3. 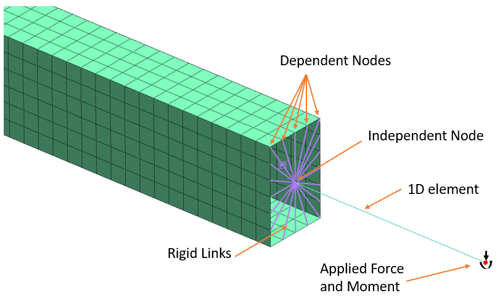 The second example shows how to add a detailed mesh section to a simple 1D beam element model. This example also shows using rigid links has an insignificant impact on the analysis results. The model shown in figure 4(a) is created in midas Civil 2022 v1.1 and was assigned a section property of AISC HP14x117 steel I girder. The beam is simply supported on 2 nodes, and gravity load is applied. The 1D beam model is then imported to midas FEA NX 2022 v1.1 using .mxt format, as shown in figure 4(b). Information regarding section property, material property, boundary conditions, and loads are also imported. The 1D elements in figure 4(b) are visualized with their section properties shown in orange, to not confuse them 2D plate elements.

Figure 5. (a) 2D CAD geometries are created reflecting the I girder section (shown in transparent plates). (b) 2D shell mesh with an assigned thickness is created based on the 2D geometry.

Figure 6. Connecting the 2D mesh to the 1D mesh using the rigid link to ensure loads are carried over. 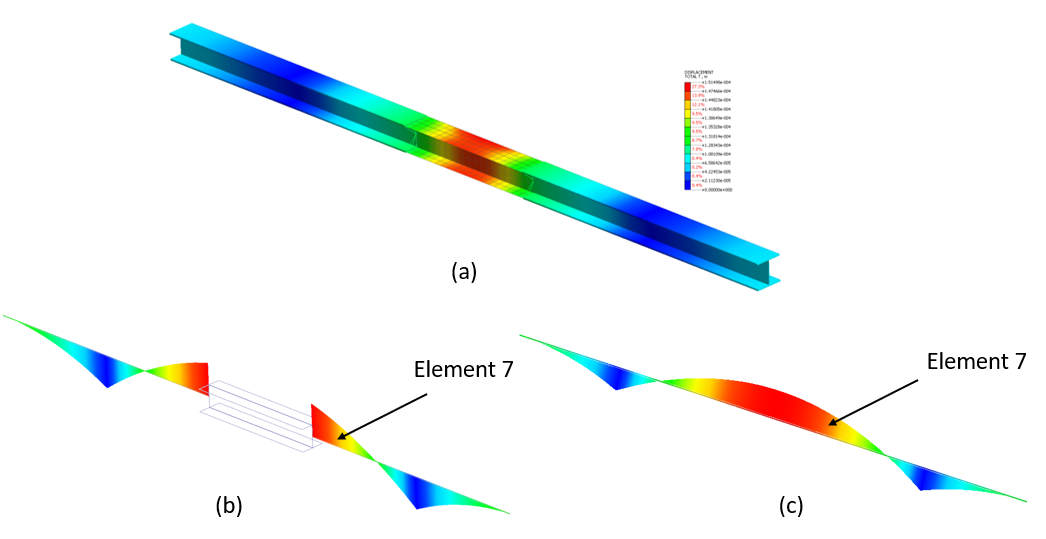 Table 1. Comparison between the moment in Y at element 7 for both models.