To ensure stable analysis performance and reliable result approximation, meshing is important. Meshing is the process to create finite elements and to connect those elements to formulate a set of functions. Finite elements are created by separating the known geometry with imaginary lines, and the elements are then connected with each other by specifying nodal connectivity at the element boundaries. Every element can be represented by a set of matrices (shown later), and connecting the elements essentially compiles the individual matrices into one structural matrix.

To ensure stable analysis performance and reliable result approximation, meshing is important. Meshing is the process to create finite elements and to connect those elements to formulate a set of functions. Finite elements are created by separating the known geometry with imaginary lines, and the elements are then connected with each other by specifying nodal connectivity at the element boundaries. Every element can be represented by a set of matrices (shown later), and connecting the elements essentially compiles the individual matrices into 1 structural matrix.

In this article, we are going over each type of the finite element listed above, explaining its pros and cons, and when to use each type.

One-dimensional elements (line elements) include bar elements and beam elements, and the difference between the two depends on their load-bearing capabilities. Bar elements are suitable for modeling trusses because their load-bearing capabilities are limited in the axial directions. On the other hand, beam elements are suitable for modeling frames because they can resist bending, twisting, as well as axial forces. A beam that is continuous over two or more supports can usually be modeled using one beam element per span between supports without using several beam elements to model one individual span. Thus, when a one-dimensional element is used for static analysis, the discretization phase of modeling becomes trivial, and for stress analysis, the name “matrix methods of structural mechanics” may be used in preference to “FEA” [1].

To represent a bar in axial tension, shown in figure 1, the following considerations can be made to compile the stiffness matrix.

Figure 1. A prism bar with one end fixed and the other end subjected to a force P.

A prismatic bar of length L, cross-section area A, and elastic modulus E is subjected to a force P at one end and with the other end fixed. The tensile elongation of the bar can be represented as

For a two-node bar element, shown in figure 2,

The equilibrium at each individual node gives the following:

Which can be written in the matrix format as:

Where [k] is the characteristic matrix (stiffness matrix), {d} is the displacement vector, and {r} is the loads associated with each individual node.

Figure 3 shows a beam element with two nodes. Each node is subjected to two degrees of freedom (figure 3a) and two nodal forces (figure 3b). Using the Euler-Bernoulli beam theory, the following matrix equation can be formed: 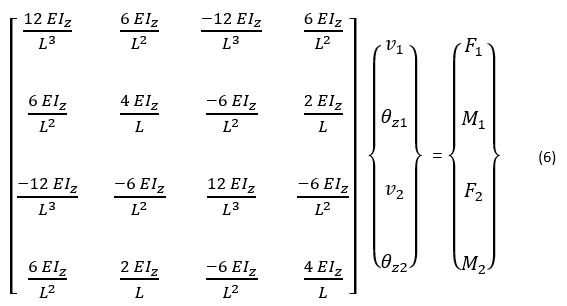 The same element stiffness matrix can be obtained by calculating using interpolation and shape functions,

Where [B] is the strain-displacement matrix obtained from the shape functions [N]. We can also use shape function interpolation to obtain the stiffness matrix of 2D and 3D elements as well, as shown later in the article.

where again, [k] is the stiffness matrix, [B] is the strain-displacement matrix obtained from the shape functions, [E] is the constitutive matrix, t is the thickness of the element, and A is the area of the element.

Common 2D problems include plane stress, plane strain, shell, axisymmetric solid, geogrid 2D, and gauging shell elements. Plain strain and axisymmetric solid elements are 2D shape elements, but they are used to express 3D stress states [2]. The common 2D element shape used is the triangular element with 3 nodes, shown in figure 5a, this type of element is called a constant strain triangle (CST) because, in stress analysis, a linear displacement field produces a constant strain field [1]. The CST elements do not work very well, because the “locking” effect can make the mesh overly stiff [3]. Even though refining the mesh can help with the accuracy, it also does increase the analysis solving time. The inaccuracy due to “locking” can be improved with the 6 node triangular elements. As shown in figure 5b, they have middle nodes between the vertices. 6 node triangular elements are also known as linear strain triangles (LST) or quadratic triangles.

A simple but less used 2D element is the 4-node rectangular element (Q4) whose sides are parallel to the global coordinate systems. This system is easy to construct automatically but it is not well suited to approximate inclined boundaries [4]. The Q4 elements experience the same “locking” effects as the CST elements, however, the issue can be improved with quadratic rectangular elements (Q8, Q9) by adding mid edge nodes.

As shown in figure 6(a), tetrahedron has 4 nodes and is the most basic 3D finite element. Figure 6(b) shows a pentahedral (pyramid) element, figure 6(c) shows an 8 node rectangular solid element (Q8), and figure 6(d) shows an 8 node hexahedral isoparametric element. 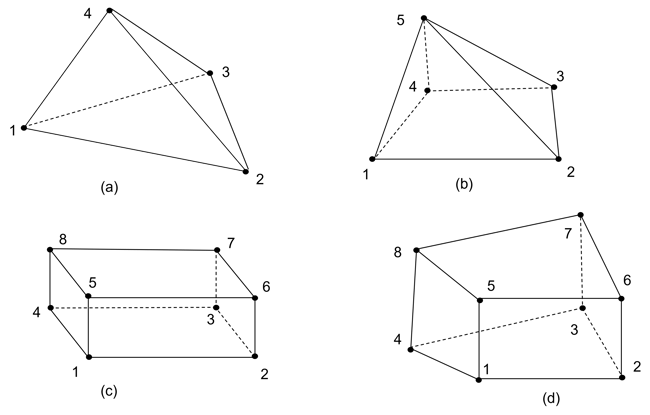 3D geometries are needed to perform 3D mesh and they come from CAD models, which take longer and more effort to produce. Furthermore, analysis containing 3D elements usually contains more nodes and elements thus would take longer to solve. 2D analysis, however, requires less time to mesh and less time to solve. The 2D analysis also provides a more sufficient amount of structural information than 1D analysis and produces results close to 3D analysis. However, 2D analysis can only replace 3D analysis when structures can be represented by plate elements. When a structure is more complex, as shown in figure 7, 3D elements need to be used. 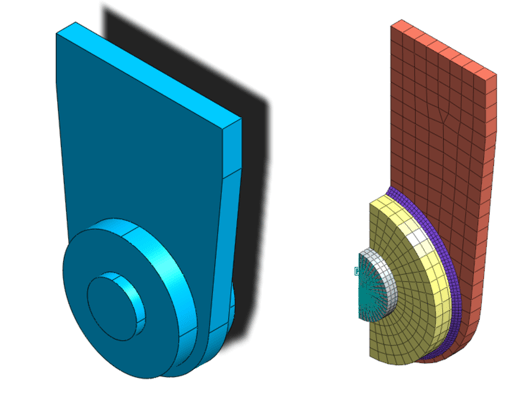 Figure 7. A lug and pin model.

Engineers sometimes model structural elements using combined 1D/2D/3D mesh to take advantage of the benefit of each type of element while saving analysis time, as shown in the bridge model in figure 8. 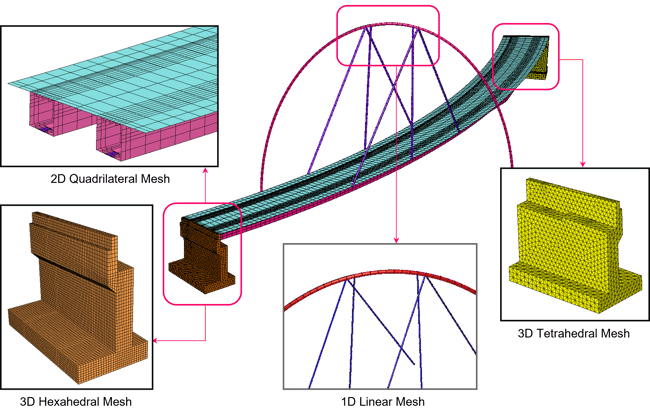 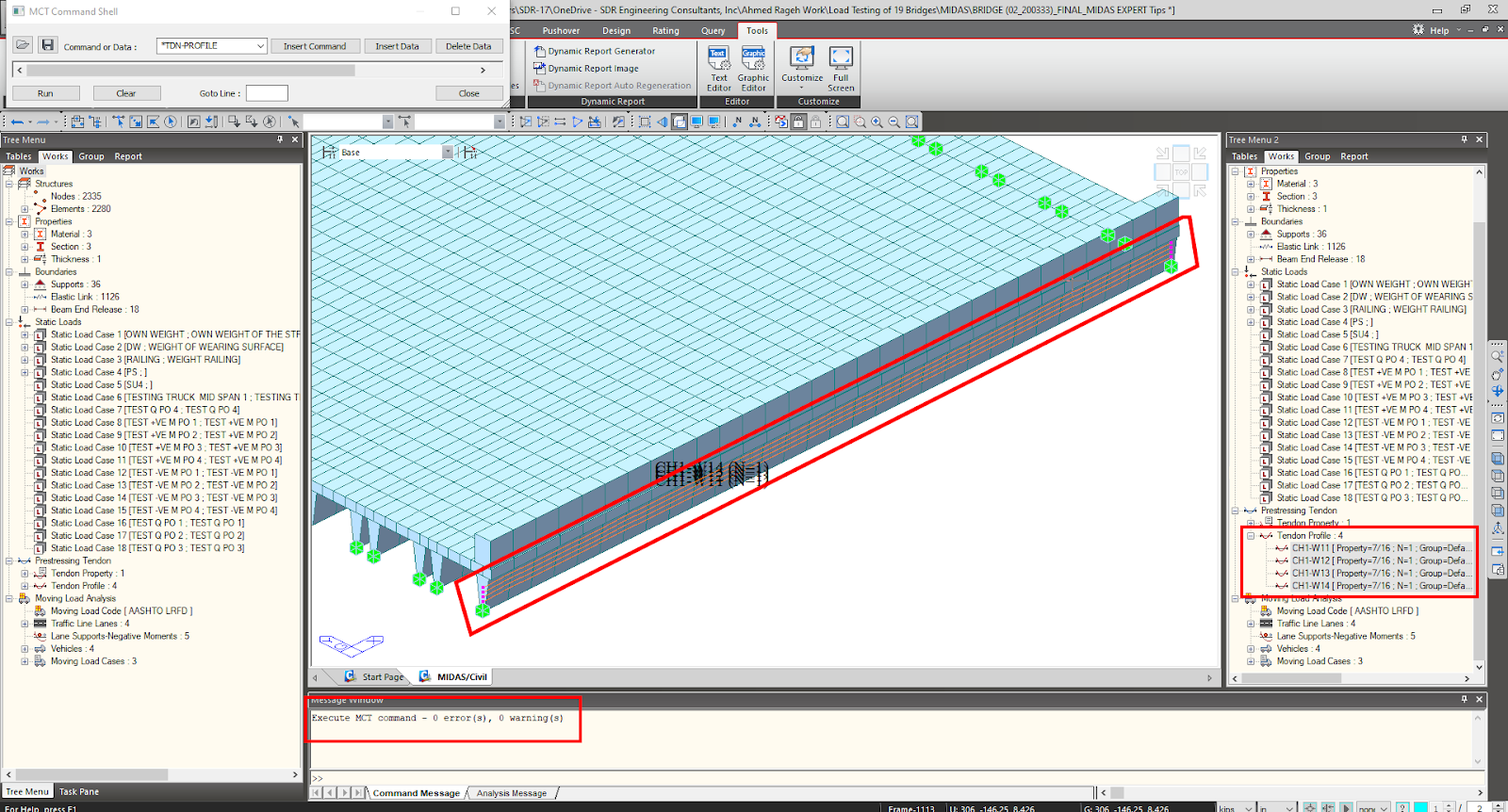