Suspension bridges exhibit significant nonlinear behavior during the construction stages. But it can be assumed that the bridge behaves linearly for additional loads (vehicle, wind load, etc.) in the completed state analysis. This is due to the fact that sufficient tension forces are induced into the main cables and hangers under the initial equilibrium state loading. It is thus possible to perform a linearized analysis for the additional static loads at the completed state by converting the tension forces in the main cables and hangers resulting from the initial equilibrium state loading into increased geometric stiffness of those components. This linearized analytical procedure to convert section forces to geometric stiffness is referred to as the linearized finite displacement method. This procedure is adopted because a solution can be found with relative ease within acceptable error limits in the completed state analysis.

This training explains the overall modeling and result analyzing capabilities for the completed state and construction stage analyses of a suspension bridge. 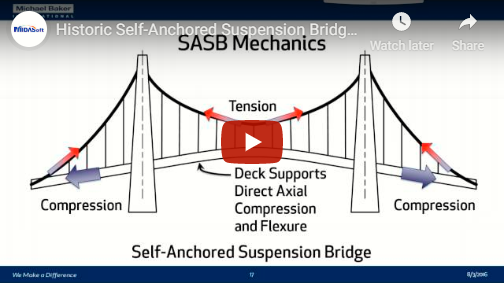 Do you want to see how people use it? Click Here