Understanding Creep & Its Effect in Bridges

A concrete specimen when subjected to load undergoes response which is both immediate & time dependent. The time dependent effect can be majorly induced due to creep & shrinkage. If we talk about the deformation induced for a specimen under sustained loading, then its value increases & can be many times greater than its initial immediate value. Therefore, it becomes essential to consider these long-term effects.

To start with, let’s understand what does creep and shrinkage stands for.

Creep: It is the affect due to which concrete undergoes continuous deformation under sustained loading applied for a considerable time.

To accurately consider the effects of creep & shrinkage, two prerequisites are necessary:

As discussed above that under the sustained stress, creep strain develops gradually with time. But the creep develops rapidly, and later the rate of increase slows appreciably with time as shown in Fig1.

We can infer from the figure that when the time is tending to infinity, creep would be approaching a limiting value. Hence, after several years, the rate of change of creep is quite small. Due to this reason around 50 per cent of the final creep develops in the first 2–3 months and about 90 per cent develops after 2–3 years.


The Creep effects can be categorized in two ways:

If we talk about the creep primary according to code CEB-FIP 1990, then it is assumed to be linearly related to stress & for a constant stress applied at time , it can be calculated as:

is the creep coefficient

is the modulus of elasticity

The creep coefficient can be further calculated as:

ϕ_0 is the notional creep coefficient

t is the age of concrete (days) at the moment considered

To understand about the effects of creep we’ll be taking an example of simply support beam.

In this example, we’re having a simply supported beam which is loaded with an axial load of 500 kN. Self-weight is not considered for the analysis.

The maximum axial deformation for the same load is 6.847 mm:

If we check the creep coefficient for a stage duration of 7 days, where element is activated at the age of 3 days calculated from the software as per code CEB FIP 1990, the value is 0.783 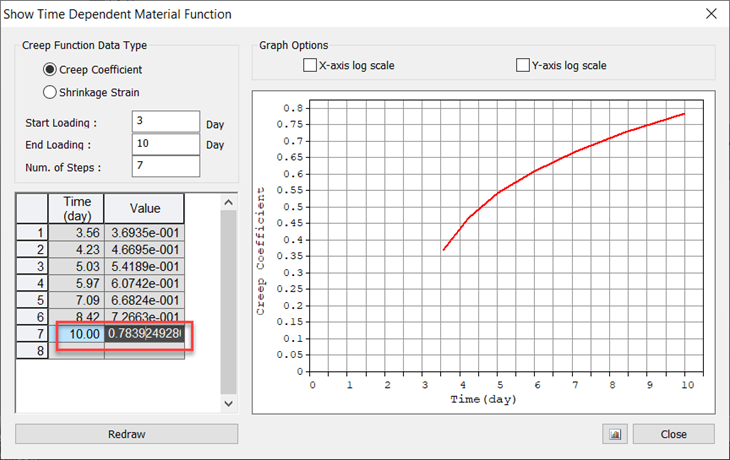 Using this value, the creep primary deformation can be calculated:

If we check the creep primary deformation for a stage duration of 7 days, where element is activated at the age of 3 days the maximum deformation is 5.24 mm:

So, the actual deformation is very close to the deformation obtained as per manual calculation wiz. 5.3mm.

So, in this way creep primary effect is considered. To understand the behavior of creep secondary, we’ll be considering second example.

In case of first example, the structure deformation is not restrained, hence the creep effects will be released, and stress accumulation won’t be dominant. So, in this coming example, we’re considering an integral type of structure. First it would be simply supported & and at later stage, the boundary condition would be changed to fixed hence integral action will come into picture. Once the structure is restrained, the creep effects will not be released, and stress accumulation will occur which can be seen in creep secondary results.

In this coming example, two beams are casted having the support condition as simply supported & loading as shown.

In this stage the creep primary effects would be induced according to the member age & material used. But since the supports are simply supported, the secondary effects will not be dominant here & the values are quite insignificant:

Fig7. BMD due to creep secondary in Stage 1

But in the second construction stage, the integral action of beam is simulated, and the end conditions become fixed as shown below:

So, here the primary effects would be in accordance with the support condition of Stage 1. But since the restrains provided now will not allow for free deformation, secondary effects will be dominant in the structure:

Fig9. BMD due to creep secondary in Stage 2

So, from the example above, we can clearly infer that the secondary effects are dependent on the boundary condition provided.


From the discussed examples, we can understand that why it is important to consider the time dependent effects. We’ve seen that depending upon the boundary condition, creep secondary effects changes for the structure. If the free movement against creep is allowed, then the creep secondary effects won’t be dominant but in case there are restrain provided then these effects become quite dominant. Hence, it is quite important to consider these effects for the structure.