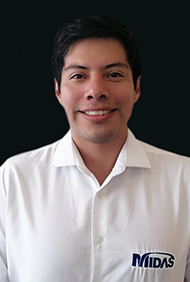 Due to the peculiar site soil conditions, as the great deformation capacity of its clay layers, the effects of soil-structure interaction must be considered. Those effects consist of a set of kinematic and inertial effects that occur between the structure and the soil because of its deformation capacity at seismic response excitation.

The Soil-Structure Interaction (SSI) modifies the dynamic properties of the structure assumed, in the first step, with a non-deformable base. This effect is of utmost importance for flexible structures (as bridges) located in soft soils with long site periods. 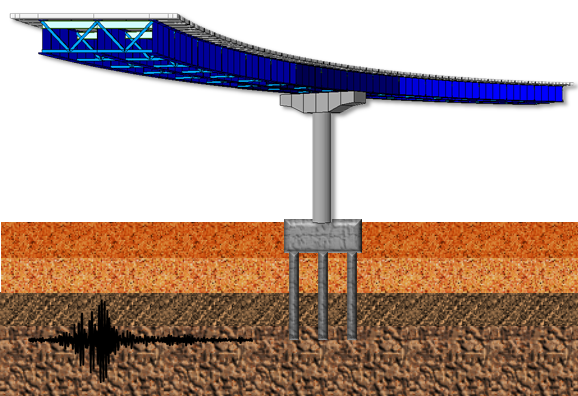 The Soil-Structure Interaction (SSI) effects have three essential concepts (figure 2), and they are necessary to understand the increase of the fundamental period of the bridge and its associated damping:

a) Site Effect: It is the seismic response influenced by geological and topographical local conditions and, more importantly, by the mechanical properties of the soil. That is, since the soil stratum overlying the bedrock (point A) will have different properties, the movement between points A, B, and C will be different, even in the absence of the foundation.

b) Kinematic Interaction: The free-field ground motion modification due to the foundation's presence. That is, it considers that the foundation, which is an element with greater stiffness than the soil, leads to a rotational excitation at the base of the foundation system (point D) since points C and B cannot move independently of each other. Translational movements and displacements are generated due to rotations in the soil-foundation system. Those two movements correspond to a rigid body movement of the superstructure relative to the soil.

c) Inertial Interaction: It is the relative displacement of the foundation with respect to the ground, produced by the inertial forces of the superstructure on the soil-foundation system. The inertial interaction can increase or decrease the design forces with respect to the values corresponding to a fixed base, depending on fundamental periods and damping of the bridge and also on the design spectrum and their values associated with the two parameters mentioned. That is, the displacements and strength demand increase or decrease depending mainly on the period relationship between the bridge and the soil; however, these effects decrease as the deformation capacity of the structural system is greater (Avilés and Perez-Rocha 2005). 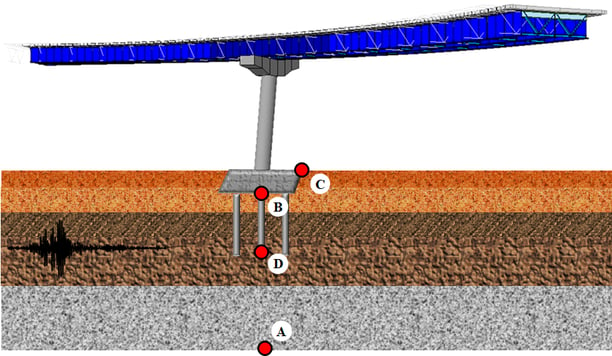 Elastic boundary elements are used to define the stiffness of foundations. Spring supports at a node can be expressed in six degrees of freedom, three translational, and three rotational components with respect to the Global Coordinate System (GCS). The translational and rotational spring components are represented in unit force per unit length and unit moment per unit radian, respectively. Spring supports are readily applied to reflect the stiffness of columns, piles, or soil conditions. When modeling sub-soils for foundation support, the modulus of subgrade reaction is multiplied by the tributary areas of the corresponding nodes. In this case, it is cautioned that soils can resist compressions only.

midas Civil provides Surface Spring Supports to readily model the subsurface interface's boundary conditions. This Spring is selected in Model>Boundaries>Surface Spring Supports, and the modulus of subgrade reaction is specified in each direction (Figure 4). The soil property is then applied to the effective areas of individual nodes to produce the nodal spring stiffness as a boundary condition. To reflect the actual soil characteristics, which can sustain compression only, Elastic Link (compression-only) is selected, and the modulus of subgrade reaction is entered for the boundary condition.

The axial stiffness of Spring supports for columns or piles can be calculated by EA/H, where E is the modulus of elasticity for columns or piles, A is the Effective cross-sectional area, and H is the Effective length. Generally, boundary springs at a node are entered in the direction of each degree of freedom. However, additional coupled stiffness associated with other degrees of freedom must be considered for more accurate analyses. That is, springs representing coupled stiffness may become necessary to reflect rotational displacements accompanied by translational displacements. For instance, it may be required to model pile foundations as boundary spring supports. A more rigorous analysis could be performed by introducing coupled rotational stiffness and translational stiffness in each direction.

Singular errors are likely to occur when stiffness components in certain degrees of freedom are deficient after formulating the stiffness. If the rotational stiffness components are required to avoid such singular errors, it is recommended that the values from 0.0001 to 0.01 be used. The range of the values may vary somewhat depending on the unit system used. To avoid such singular errors, midas Civil thus provides a function that automatically assigns stiffness values, which are insignificant to affect the analysis results.

An integral bridge is one in which the bridge deck and its supporting abutments and piers are integrated without expansion joints to absorb the deformation of the bridge deck using the flexibility of the abutments and piers. To account for this soil characteristic, lateral springs are modeled as compression-only springs, and vertical springs are modeled as linear elastic springs. 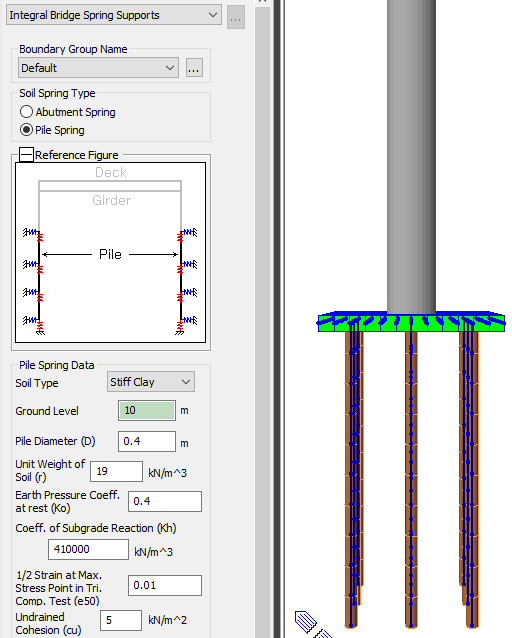 As a first step, you must select the frame element to which the pile springs must be assigned. Soil Types are classified into Sand / Soft Clay / Stiff Clay. Depending on the selected Soil Type, the stiffness calculation method will differ. The ground level is the Z coordinate of the ground. Other parameters need to be set as Pile Diameter (D), Unit Weight of Soil (γ), the coefficient of earth pressure at rest (K0), the modulus of subgrade reaction (Kh), the angle of internal friction of soil (Φ) and the initial soil Modulus (k1), that is a constant determined according to the relative density. All these parameters determine the stiffness of nonlinear elastic lateral springs for the soils adjacent to piles. The elements to which the pile springs are assigned should have their local axis aligned in the same direction.

Dynamic Properties Comparison of the Bridge

The use of different support conditions at the base of the bridge will result in a change in the dynamic properties of the structure. Three different models are compared where the boundary conditions are varied; the Model of figure 6a takes into account a completely fixed base; the Model in figure 6b has the pier cap modeled with plates, and the stiffness of the ground was modeled with the surface spring support function; and finally, the Model in figure 6c has the pier cap and foundation piles modeled using the Surface Spring Support and Pile Spring Support features respectively.

From these figures, the stiffest Model is the one that considers the base of the bridge as fixed with a fundamental period of 1.07 s (figure 6a) because the stiffness of the soil is modeled as infinitely rigid. However, the Model that considers the stiffness of the ground (895 kN/m3 modulus of subgrade reaction) and only the pier cap is modeled; it is the most flexible Model with a fundamental period of 1.97 s (figure 6b).

Figure 6: Fundamental Period of the bridge with different boundary conditions

The use of the foundation piles and the soil stiffness properties with the pile spring support function makes the Model stiffer than the Model with surface spring but without foundation piles (figure 6b), but more flexible where a fixed base is considered (figure 6a). More importantly, an integral bridge modeling (figure 6c) will result in better control of the pitch effect. It can be corroborated in table 1, where the mass participation percentage is reduced for the RX and RY values to less than 20% for the first three vibration modes. Another critical difference is that most of the mass participation percentage in DX and DY changes according to the boundary conditions modeled.

The change in the participation of the mass, in each direction of analysis, because of the changes in the boundary conditions increases or reduces the fundamental period among the models. Moreover, the values for the response spectrum cases in structural members' design also change. For example, the Model with soil stiffness modeled with the Surface Spring Supports function (figure 7b, green line), its flexibility allows considering a lower value from the response spectrum case than the rest of the models compared. However, it is essential to consider the displacements generated in each Model for the bridge design so much for the maximum considered earthquake (MCE) and frequent earthquakes.

Displacements Comparison of the Bridge

Figures 8, 9, and 10 compare the elastic displacements obtained with the response spectrum load cases with different boundary conditions. In the Model with a fixed base (figure 8), the displacements in the base are zero, while the maximum displacements occur in the deck with an approximate magnitude of 10 cm for both the X and Y directions (figure 8).

When a boundary condition with surface spring supports is used, the maximum displacements in the deck increase to 14 cm for the X direction (figure 9a). In contrast, for the Y direction, it is increased to 12 cm (figure 9b) compared to the fixed base model. Moreover, the maximum displacements in the entire structure are at the pile cap with approximately 23 cm in both directions (figure 9) because, in this Model, both the horizontal and vertical stiffness of the soil are considered. 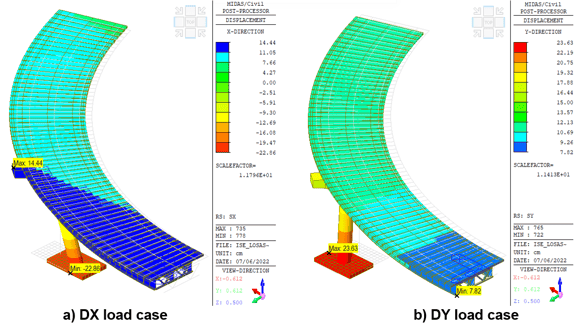 Figure 9: Elastic displacements of the bridge with surface spring supports

Figure 10: Elastic displacements of the bridge with pile spring supports

Force Elements Comparison of the Pile

The above results commented will lead to changes in the longitudinal and transversal rebar proposals to fulfill the demand from the load combinations to achieve the strength and deformation requirements imposed by the code.

Figure 11:Beam diagrams envelopes for pier design of the bridge with fixed base

For the fixed base model, an area of 370 cm2 for longitudinal rebar is needed to fulfill the strength demands, representing 1.53% of the rebar ratio. However, when soil-structure interaction effects are used, the rebar area needed to fulfill the strength demand is reduced to the minimum possible, 231 cm2 of longitudinal rebar (rebar ratio of 1%). Even when the minimum reinforcement is used, the demand/capacity ratio of the bridge pier is 45%. This result allows us to reduce the strength of the concrete section or the cross-sectional area of the bridge pier.

Figure 14: Comparison of design reports for pier design of the bridge


The use of Soil-Structure Interaction (SSI) effects allows us to create a complete mathematical model of the bridge; that is, it will enable us to model the superstructure, the substructure, and the foundation. This integral bridge modeling allows us to know more realistic and accurate results of the structural behavior of a bridge on soft soils (sand, soft clay, or stiff clay). In addition, using SSI effects modifies the dynamic properties of the bridge, and the maximum expected displacements in the event of the maximum considered earthquake (MCE) or for frequent earthquakes.

In general, the use of SSI effects increases displacements because soil stiffness is considered but does not necessarily increase the amount of rebar area needed to fulfill code strength requirements. As can be seen in the comparison presented in this document, although the displacements increased by 25%, the demand/capacity ratio was reduced by approximately 55% for the same design conditions and only by varying the support conditions of the bridge.