Structural connections are usually the weakest part of a steel structure; however, they are rarely the subject of structural analysis. To simplify the analysis, engineers use elastic links with reduced elastic modulus to simulate structural connectors’ effect on the general structure. However, the structural connectors themselves may experience failure due to the general structural behavior, and their nonlinear complexities may not be fully approximated by an elastic link. A connection may involve complicated geometry, misalignment, different materials, prestress, making or breaking of contacts, friction and slippage, plastic action, and damage to the material from bending, welding, and punching holes [1].

Due to the complexities in geometry and structural behavior, detailed FE analysis is needed for structural connectors. Detailed analysis requires engineers to produce a realistic CAD and then export the geometries to FEM software. The CAD models can also be directly produced in FEM software to mesh and perform finite element analysis (watch how to create irregular geometry and mesh in a detailed analysis software here). Figure 1 shows the I girder splice connection modeled as plates and meshed using plate elements in Midas FEA NX. Figure 2 shows the solid model and mesh of the same structural connection. To read more on the pros and cons of using the plate (2D) and solid (3D) elements for FEA, go to Basic Finite Element Mesh Explained.

Contact analysis fundamentally assumes that two objects in a space can be in contact, but cannot penetrate each other (non-penetration condition), and are nonlinear in behavior. The common types of contacts are general contact, rough contact, welded contact, and sliding contact [2]. General contact, shown in figure 3, considers the impact, the impact friction between the two objects. Rough contact, also shown in figure 3, allows the impact between the objects but does not allow sliding. Welded contact, shown in figure 3, considers the two objects welded from the start of the analysis. Contact forces, either gained or lost, must be determined to calculate structural behavior. The location and extent of contact may not be known in advance and must also be determined [1].

After the user has defined the (expected) contacting surfaces, the algorithm determines contact by the adjacency between the slave node and master segment. Generally, the order of the slave-node-defined object and master-segment-defined object does not matter. But from a numerical point of view, the master segment needs to be defined on the object with a relatively larger stiffness, or relatively element-sparse object, to obtain more accurate analysis results. Once contacting surfaces are defined, the program determines the contacting force based on the contact surface parameters (normal stiffness scaling factor) and obtains the extent of nodes penetration. It can be suggested by a simple problem below.

In figure 4 (a), contact would establish between the moving block and the rigid block when x = L. In the FEM software, a mathematical spring with no physical volume is activated once x = L. Realistically, the x value does not increase once x = L, therefore, to achieve this, the mathematical spring would have a very large stiffness. 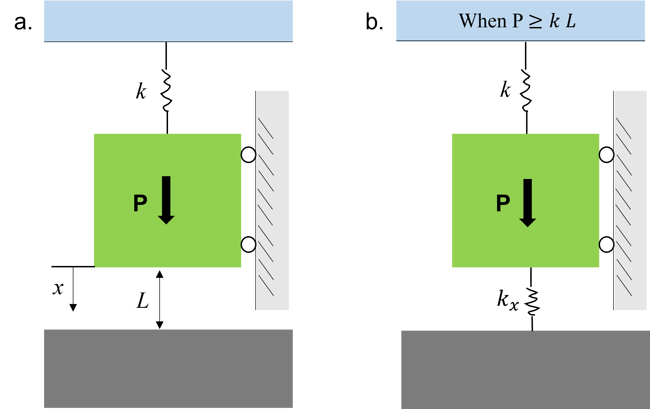 The change in stiffness can be represented by the following,

And the load versus displacement curve is reflected as follows in figure 5,

In midas FEA NX, kx is defined as the normal stiffness scaling factor. It should be defined with a reasonable size since it kx is too small, a large amount of nodal penetration would occur, and if kx is too large the analysis would experience convergence difficulty due to “bouncing”. The sudden change in stiffness at contacting surface as shown in figure 5 results in large nonlinearities in the finite element analysis, therefore, a nonlinear solver is needed to model such behavior.

Figure 7 shows the lap joint under lateral tensile stress. To connect the two mesh sets whose nodes do not merge, a welded connection is used. And figure 8 visualizes the structural connection through exaggerated displacement.

Figure 9 shows the von-mises solid stress at the splice I girder connection. Force and moment values at the separate ends of the I girders are initially obtained from general structural analysis results using 1D beam elements. In the solid model shown in figure 2, those loads are applied at the center node of the I beam ends. and rigid links are created between the center node and every node at the I beam ends. This ensures that the force and moments are applied uniformly at the beam end of the solid model. Bolt is simulated using a rigid element connecting the center of the bolt holes on each of the splice I girder connector plates. Bolting action is simulated by connecting the bolt rigid element with the hole surface nodes using rigid elements. General contact is established between the connector plates. Figure 10 shows the progressive plastic failure of the steel material around the bolting holes. 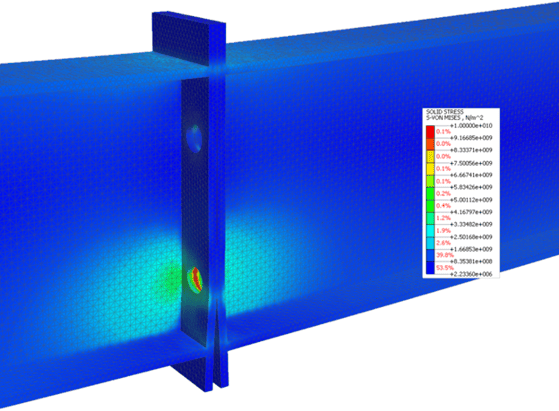 Figure 10. Progressive plastic failure of the steel material at the splice I-girder connection.