“How The Heck Did You Get That Shape?”

Topology optimization is a novel and rapidly growing field of structural mechanics that offers great techniques to produce optimal designs. It is a mathematically complex and challenging field, and its development has often been refrained by conceptual inconsistencies and terminological confusion. It is the purpose of this article to give a conceptual explanation of topology optimization, and, by extension, of optimization in general.

Topology optimization for higher volume fractions is now often termed Generalized Shape Optimization (GSO). It consists of the simultaneous optimization of topology and shape of internal boundaries in porous and composite continua. In discretized mechanics, major early developments were influenced by the observations of Cheng and Olhoff in 1981, which stated that optimized solid plates contain systems of ribs which are similar to optimized grillages. In that same decade, for the compliance design of perforated plates in plane stress, optimal microstructures were studied with this method by various mathematicians.

The first exact analytical solutions for optimal perforated plates and the correct expressions for the rigidity tensor of homogenized optimal microstructures were obtained by Rozvany, Olhoff and Bendsoe in 1985-87, and by Ong, Rozvany and Szeto in 1988. Finite-element-based topology optimization for higher volume fractions was introduced by Bendsoe at the end of 1980s by extensive research, which set the basis for a ‘homogenization’ school of topology optimization (e.g. Bendsoe and Kikuchi 1988; Bendsoe, Diaz and Kikuchi 1993). A parallel exploration of the Solid Isotropic Microstructure with Penalization (SIMP) approach was originally suggested by Bendsoe in 1989, and later developed and named by Zhou and Rozvany in 1990-92.

In order to better understand the method behind topology optimization, one must understand what optimization is and what it aims to accomplish. The infographic below will give you a general definition.

Optimize your design for FREE!

For example, let us assume we are designing the cross section of the undercarriage of an airplane. By traditional methods, the required stiffness is achieved by reducing mass by drilling holes of appropriate size, and in appropriate quantity, within a rectangular cross section, but these values must be found by intuition and trial-and-error. When topology optimization is applied to this problem, however, it is possible to simultaneously find the number and shape of internal holes directly from the rectangle. Topology optimization makes it possible to satisfy design requirements to a high degree without the need of intuitive iterations.

Before performing topology optimization, it is necessary to understand geometric density, the one and only design variable in topology optimization. Geometric density is an imaginary value used to express the layout of material on a space. Referring to the picture below, elements on parts where the material should not be placed have a density of 0, or a small value close enough to 0, and parts where the material should be placed have a value of 1, or close enough to 1. According to this scale, if a geometric density of value between 0 and 1 is determined for all elements, the overall material distribution is determined.

In other words, sensitivity is the rate of change of the objective function in response to changes in the design variables. By this standard, the direction in which design variables are changed is determined.

If sensitivity is relatively high, the change in design variables is determined to be relatively large.

However, the absolute size cannot be determined, and since sensitivity is also affected by any changes to the design variables, multiple repetitions are necessary before an optimum value can be deduced. And since topology optimization is carried out based on sensitivity, this method will also require multiple repetitions to determine the optimized topological layout. 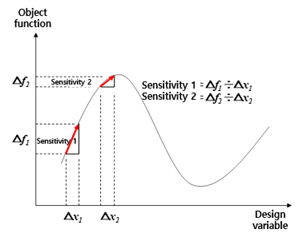 Formulation of a Topology Optimization Problem

This is similar to selecting the analysis type. Since topology optimization can be used in linear static, modal and frequency response analyses, the analysis type appropriate for the design purpose should be selected.

Many other objective functions can be formulated for their respective analysis type depending on the design needs of the engineer.

Since the only design variable in topology optimization is the geometric density of the elements in the structure, a design set and non-design set can be determined with respect to the mesh to specify what elements will be subjected to optimization.

Elements without volume that are not 2D or 3D elements, such as springs, rigid bodies or masses, are automatically excluded from the analysis, even if the element is included in the design set.

If reduction of weight is the key objective, for example, volume is minimized using displacement or stress-limiting conditions. When maximizing stiffness at a set amount of material, volume ratio is selected as the constraint. For optimization stress-limiting conditions, there is almost no correlation between changes in maximum strength and overall amount of material. Therefore, the constraint is not the maximum stress but the average stress of all the elements.

That’s how we got this shape…